The United Nations has set conflicting goals for 2030: combatting climate change while providing energy to all.

Last week, the vast majority of the world’s prime ministers and presidents, along with the odd pontiff and monarch, gathered in New York to sign up to the United Nations Sustainable Development Goals (SDGs). Across 169 targets, the SDGs declare the global aspiration to end poverty and malnutrition, slash child mortality, and guarantee universal secondary education by 2030. And they also call for universal access to modern energy alongside taking “urgent action to combat climate change.”

These last two targets are surely important, but they conflict, too: More electricity production is likely to mean more greenhouse-gas emissions. The UN squares that circle by using a definition of modern energy access that involves a pitifully low level of electricity consumption. But that does a disservice to both those worried about development and those concerned by climate change. Poor people are going to have to consume a lot more energy if they are to enjoy a lifestyle that those in the West take for granted—and that is going to take environmental pragmatism in the short term and a revolutionary change in the technology of electricity production in the long term.

More than 1.3 billion people across the planet have no access to electricity. Many of those who do have access suffer brownouts, blackouts, and other forms of limited supply. Absent electricity, people use less efficient and more harmful substitutes: Kerosene lamps are often behind burn injuries and deaths around the world, and working under those lamps is as bad for your health as smoking two packs of cigarettes a day. That’s why the arrival of power lines can be so transformative. Electrification in northern El Salvador was associated with a 78-percent increase in time studying and in class among school-age children and a 25-percentage point increase in the likelihood of households operating a business. These businesses made on average $1,000 a year—not bad in an area where local incomes are around $770 per person.

Recognizing the development impact of electricity access, the International Energy Agency (IEA) has championed the idea of “modern energy access” for all, involving universal electricity and clean cooking fuels like natural gas. The IEA claims that the additional electricity consumed by the newly connected (alongside the gas used in clean cooking) would add just 0.7 percent to global greenhouse-gas emissions in 2030. In large part that’s because the organization suggests energy for all would add just 1.1 percent to global energy demand.

That’s possible only because the proposed consumption levels are so low. Rich countries use a lot more electricity than poor ones: According to 2011 World Bank data, the United States consumes 13,240 kilowatt hours (kWh) per person per year, while Ethiopia consumes 56 kilowatt hours per person. The IEA suggests that 500 kWh a year for a newly connected urban household is sufficient, at least for now. This might be enough to operate a floor fan, a small refrigerator, a small TV, a couple of mobile phones, and two light bulbs. But a new large fridge in the United States can consume 500 kWh all by itself. A freezer could similarly bust the IEA household budget. And even in a comparatively chilly place like Vermont, central air conditioning for a household uses an estimated 1,125 kWh a year. Electric heating can add another 1,000-plus. Add in washing machines, fans, lighting, and a television, and usage increases further. And that’s just in the home. If developing countries are going to get richer, healthier, and more educated, schools, hospitals, factories, and offices need to be powered. According to World Bank data, no country in the world with an income per capita above $10,000 has electricity consumption below 3,880 kWh per person per year. That’s nearly eight times the IEA target for a whole household.

The IEA suggests 500 kWh a year is sufficient for an urban household—enough to operate a floor fan, a small refrigerator, a small TV, a couple of mobile phones, and two light bulbs.
If low- and middle-income countries were to reach an average electricity consumption of 3,880 kWh a year per person (and many are already above that level), global electricity production would have to climb 60 percent. Were they to get to one half of U.S. levels, electricity production would rise 130 percent.

We should want that to happen. The UN’s Sustainable Development Goals call for rapid progress in income growth, employment opportunities, poverty reduction, and health and education outcomes. Electricity is a vital part of that progress. But given the central role of electricity production in climate change, that progress poses a challenge. For example: In especially hot years, economic output declines in poor countries while it does not in rich countries. One reason why: Rich countries have more air conditioners. At the same time, the impact of hot air on poor economies is one reason why the SDG climate-change goal is also important: Global warming is going to hit poor countries hardest.

The good news is that the world’s energy supply is already changing—each year boasting more production capacity for renewable energy like solar and nuclear than fossil-fuel capacity in the form of coal and gas-fired power plants. Still, meeting short-term energy demand in developing countries in a way that is climate-sustainable requires taking steps that will alarm environmental advocates. Costa Rica, for example, recently powered itself for 75 days using only renewable energy, but more than 80 percent of that power came from dams. Other countries that rely heavily on renewable energy are using nuclear power. Countries that have experienced some of the fastest declines in emissions in recent years have used fracking to increase production of natural gas, which produces less greenhouse-gas emissions than coal.

No country in the world with an income per capita above $10,000 has electricity consumption below 3,880 kWh per person per year.
In the long term, sustainable, reliable supplies of terawatts of energy need to be researched, developed, and scaled. Solar and wind are already playing an exciting and rapidly expanding role in powering the developing world. But countries also need electricity at night when the air is still. A group of British scientists and economists including Lords Nicholas Stern and Richard Layard have called for a “global Apollo program” to help fund the research and development of sustainable generation, storage, and smart-grid technologies, financed by 0.02 percent of global GDP.

But these technologies don’t exist yet, and that is one reason why the United Nations is so mistaken in low-balling electricity demand from developing countries. The estimate implies that this energy challenge can be met with existing technologies like off-grid solar and batteries, combined with an increase in energy efficiency, and without painful choices about the use of existing technologies. The word “solar” appears 21 times in the 2014 UN “Sustainable Energy for All” report, while “wind” is invoked 13 times and “energy efficiency” gets 70 mentions. “Hydro” gets only seven mentions and
“dam” is avoided altogether—along with “nuclear” and “fracking.”

Those who are anti-coal, anti-gas, anti-dam, and anti-nuclear when it comes to energy development in the developing world are implying that people there shouldn’t use electricity at nearly the level or low price that Westerners do. This, in turn, denies people safety, security, longevity, and comfort. Pretending the technologies already exist to avoid any tradeoff between environmental and developmental concerns doesn’t help. These technologies need to be researched and developed through robust investment, so that the climate can be sustained even as poor people around the world enjoy a better quality of life. 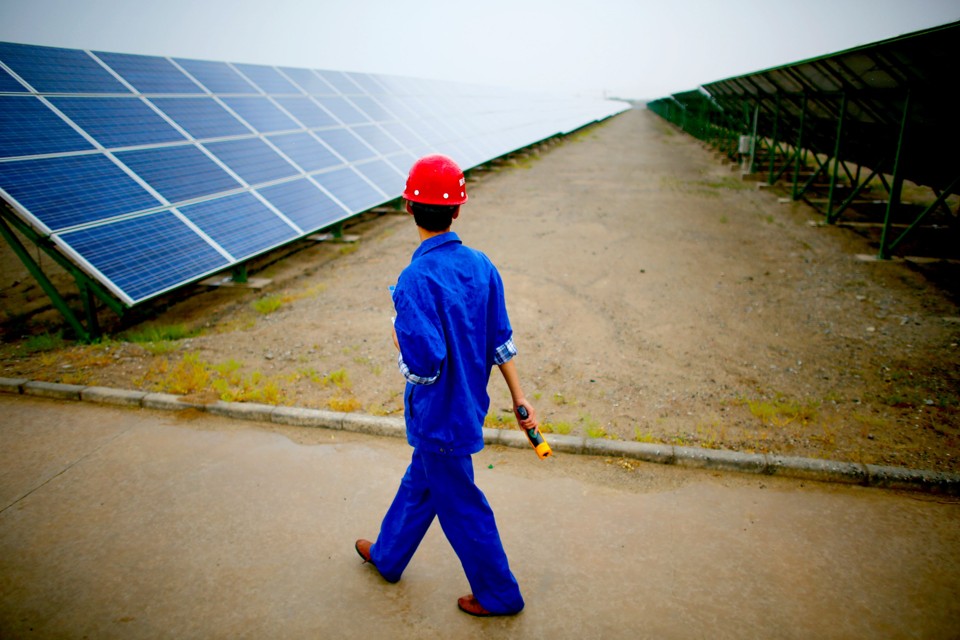 Panels at a solar farm in Dunhuang, China